Taking off for Italy

On the Amazon River

Onboard the Bluenose II

NSD Piper and Merel sharing Ann's locked up for love

Duck at the Knights Game

Bob B ... always in our Hearts

A duck in Bayfield

People spreading the word about the Beckett Project Worldwide

Stickers, Buttons & Ducks  !!! the first one was placed at the corner of Beckett Rd and Smith Rd in central Ohio. 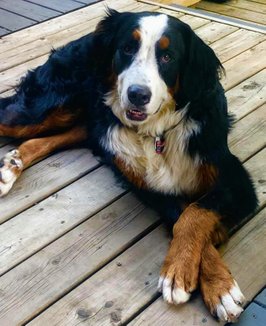 THE STORY OF "TU"

When Beckett was a toddler he loved the number 2. Everywhere we went, he would point them out in his sweet little voice. To his last day I would point out 2's and tell him for the millionth time how cute it was.  He would just smile and he never seemed to get tired of it.

To bring some joy into our home after Beckett died, we decided to get a Bernese Mountain Dog.  The night before we met her I was laying in bed "talking" to Beckett. I was telling him about the puppy and asked for his help in picking out a meaningful name. 2 popped in my head, I dismissed it thinking it wasn't a name it was a number. It continued to be in the back of my mind and I couldn't seem to shake it. The next day Paul, Ridley and I were driving to meet her. I told them that 2 kept coming into my mind but I didn't know how it could work as a name. Tu seemed too short and we didn't like Tutu. After a while Paul says "What about Ubuntu?" I asked  "What is that?"  Ridley says "It's the only operating system Beckett would use on his computer."  We all smiled thinking that works... Her name will be Ubuntu but we will call her Tu.

Out of curiosity I Googled Ubuntu. I discovered it translates to "I am because we are". It is the philosophical belief in a universal bond of sharing that connects all humanity.  I would like to believe it was Beckett guiding us to her name. It is perfect on many levels. Ubuntu (Tu) will help us remember our human connection to Beckett and remember that he will continue to live on through us.